“Give of yourself as freely as you possibly can to eliminate the darkness.”—Tituss Burgess 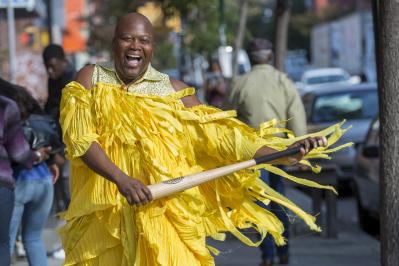 It’s from Tituss Burgess, the Emmy-nominated singer/actor who plays Unbreakable Kimmy Schmidt’s gay, out-of-work roommate.  I became interested in him because of his close relationship with his grandmother who passed to the nonphysical many years ago. He still talks to her, feels her presence and seeks her advice. When she visits, he says things get really still and he just knows she’s broached the veil.

After four episodes of playing hairdresser D’Fwan on 30 Rock who, among other scene-stealing moments, urged Alec Baldwin’s Jack Donaghy to “come out of the closet,” Burgess says, “I finally felt I’d found my purpose.”

It’s not that he didn’t enjoy his Broadway roles (in Guys and Dolls, The Wiz and Sebastian in The Little Mermaid, to name a few), but he was fervently praying for a bigger dream, a higher purpose. He got goosebumps when Alec Baldwin, after the conclusion of his four-episode run, told him he deserved a spin-off series.

At that point, he went home to his studio apartment in Hell’s Kitchen, got down on his knees and implored the Dude, the Universe, his grandma to bless him with another series-regular role.

“I said, ‘Goddess, I want another regular role with the same caliber of talent, the same level of energy, the same wonderful writing.”

He got evicted shortly thereafter.

Rather than despair, he knew it was time to employ his highest beliefs.

“I prayed for those things that I now knew were my purpose, I meditated on those things, I astral projected myself into these things. I saw myself there.”

On his first day of filming, he got a clear wink from the universe.

“I was told to report to 48nd Street between Eighth and Ninth. My hand to God, the door of my trailer opened right in front of the very place where I had fallen to my knees and prayed. I get teary just thinking about it. It was a very clear sign of my bond with my grandma, with goddess, with the universe. It was like they said, “I see you and I’m going to give you beyond what you just asked for.”

So I ask you, my friends, what are you going to ask for today from the universe?

← The sky’s the beginning
Who’s on your board of directors? →