I wrote a trilogy of 100 Best Vacation books for National Geographic. 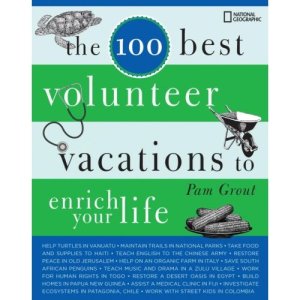 “This is the moment when we must come together to save this planet.”

Call it the Al Gore Factor, the Katrina Effect or the impulse to have an authentic experience not listed in a typical brochure, but more and more people are combining volunteering with traveling.

And it’s not just high-profile celebrities like George Clooney, Angelina Jolie and Hilary Swank who are abandoning their bubble of luxury to lend assistance to folks in developing countries.

According to a 2008 UC San Diego survey, 40 percent of Americans would like to volunteer while on vacation with another 13 percent ready to devote an entire year to hopping on a plane and providing goodwill.

The reasons for wanting to volunteer vary. Some do it to gain experience, to add some heft to the old resume. Others want to test themselves, to act out a fantasy. Still others are tired of waiting for their government to act. They want to stand up and be counted. Now.

But the thing all volunteer vacations share? They shed light. They give us a more realistic picture.

Suffice it to say, that what we see on the nightly news is not an accurate picture. It’s one reporter’s opinion, a microscopic sliver that one cameraman stumbled on to and captured in one four-minute time slot.

Even people who do travel, people who have ticked off say, the Taj Mahal and the Arch de Triomphe from their life lists, don’t always know what’s going on. Because here’s the thing. Fancy hotel chains have set up mini-Americas all over the world. You can go to Costa Rica, check into the San Jose Marriott without ever realizing the kids in the village down the road play soccer with plastic bags they tied together. You can check into the Mumbai Four Season without it occurring to you that an entire year’s salary of the guy who carried your bag to the room wouldn’t pay for even one night.

With the vacations in this book, you’ll leave that plastic state of mind behind. You’ll see a country for what it really is, not a soundbite, a number of those who died in the last tragedy. You’ll get to know real people. You’ll work beside them, share their struggles, learn what it feels like to live in a village where no men are over 50, experience what it’s like to be invisible to outsiders.

Pillow menus are fun and all, but they don’t hold a candle to meeting people like Termana, Indrah and Bu Mayan that are putting together a Balinese literary journal. Car sitters and personal fireworks shows, services offered by some luxury hotels sound impressive, but pale in satisfaction received from singing “itsy-bitsy spider” to Gwani, a five-year-old Nigerian who just lost her mother to AIDS.

Which brings us back to that light we promised to shed. If you decide to take a volunteer vacation, you can say goodbye to nearly all your preconceived notions, supposition and assumptions. Kiss it gone, this idea that you, noble person that you are, are going overseas to swoop in and save the “poor, unfortunates.” As Angelina Jolie said when she first traveled to Cambodia, back in her Tomb Raider days, back before she became the quintessential celebrity volunteer. “I expected broken, angry people and (instead) found smiling, kind, warm people.”

Ask any seasoned volunteer. People in developing countries have a depth of joy, a richness that those of us consumed with material things are often blind to. The question persists: who ends up getting helped the most?

In fact, if you really want to “save the day,” your best bet is to show up, shut your mouth and learn. Find out the truth behind the sound bite and then go home and spread the word. Effective volunteers often end up making a bigger difference back home.

This book is divided into six regions of the planet. That way, you can pick a place that has always enticed you and find a dam about to burst that needs your finger. Rest assured, there’s not a country among the world’s 194 that couldn’t use some kind of help.

By choosing a volunteer vacation by destination, you’ll get to travel to the country of your dreams, the one that’s been on your radar since second grade or since the president of the PTA came back from there and started passing out pictures. You’ll be able to immerse yourself in that wild dream country in a way not possible on the average tour bus. You’ll spend time, not with Bill Smith from one state over, but with the very people that inhabit your longed-for country. You’ll get an unique insight into their culture, their beliefs and, yes, their dreams.

So if you want to really know what’s going on in the world, this book could be a potent starting gate. Put your toes on the line and listen up.