What would a being of light do today?

“If we only knew deeply, absolutely, that our smallest act, our smallest thought, has such far-reaching effects; setting forces in motion; reaching out to the galaxy; how carefully we would act and speak and think. How precious life would become in its integral oneness.”–Irina Tweedie 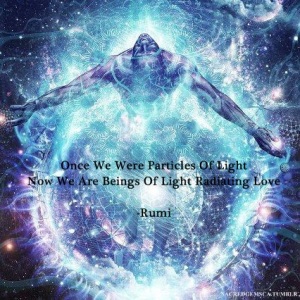 So let me guess. The question I posed in today’s headline (How would you spend your day if you knew you were a being of light?) was not the first question you asked yourself this morning. Not with news to catch up on and precautions to take.

But what if we started every morning with that question, with that intention? How different our morning, our day and our lives would be.

Instead of penning a to-do list, what if we actually got up and began acting like the being of light we truly are? A being of light isn’t worrying about coronavirus or getting tangled in political knots.

As long as we seek to become something, to get something, we will forever remain in the energy of seeking, of not having. Why not just go there now?

“Be the change,” as Gandhi famously said. Taz directed me to listen to an interview I gave post-E-Squared as I was walking this morning and wow! Did I ever need to hear this again? I even mentioned something about death back then. Really?

I’ll be writing today (on my upcoming project) about a girl, now grown up, whose brother, her best playmate, died when she was young. For many months after, he came to play with her every night after everyone else had gone to bed. Her grief-stricken mother, who like most adults forgot the truth about who she is, woke up every morning wondering why his favorite truck was out in the dining room or his legos were strewn across the kitchen.  The young girl, who hadn’t yet mastered the dominant paradigm, tried to tell her mom, but she was far too invested in the old paradigm.

Eventually, that mom will be reunited with her son. Eventually, we’re all going to get there. It’s already a done deal.

But for now, for today, ask yourself “How would a being of light spend her day?’

And if you’ve got an extra 58 minutes, listen to this interview. It helped me. And I trust it will remind you of who you really are. #222Forever

Category: Uncategorized     Tags: 222, How she really does it, Karen Motekaitis, miracles, podcast, Taz

← Escape from the trance
The absolute must-do right now: Curate your intake →

28 Comments on “What would a being of light do today?”