“You have to see the miracles for there to be miracles.”
― Jandy Nelson 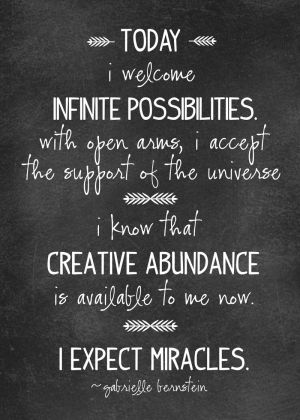 Many years ago, I had the opportunity to interview SARK for a profile in an inflight magazine. You’ve probably seen her “How to Be An Artist” poster. Stay loose. Learn to watch snails, etc. It was a perennial favorite (along with Farrah Fawcett in the red bathing suit) in dorm rooms around the nation back in the 80’s. I still have a copy framed and hanging in my guest bathroom.

Back in the catsup sandwich days, when cash wasn’t yet flowing, she started using this affirmation: “Miracle, find me now.” She’d repeat it again and again.

One day, when feeling rather desperate to pay rent, she began her favorite mantra in earnest. She was walking down the street in San Francisco, where she lives, and six $100 bills floated down to her out of nowhere.

So here’s the question I pose to you.

Is your response a) “Well, duh! She asked for a miracle so, of course, she got a miracle or b) “You’ve got to be kidding me.”

If it’s A, you’ll love the following stories that recently popped into my inbox:

#1: “A friend suggested my husband and I read your book, E2. My husband read it first and told me it was basically what I’ve already been experiencing for many years. My life has been a series of playful synchronicities for the past two decades, but the experience I had this afternoon with experiment #8 was particularly poignant.

“I was taking a walk and thought about two friends from high. I have maintained contact with one through Facebook. The other one was my best friend who died nearly 15 years ago.

“After Sue’s memorial service, the song Browned-Eyed Girl by Van Morrison was playing in the car. That song always reminded me of Su, whose favorite flowers were Brown-Eyed Susans. On my walk this afternoon, I thought of Sue, and the Van Morrison song.

“I left it at that and mentally figured that I had until about noon on Sunday to hear back from Sue. When I went through the posts on Facebook this afternoon, I saw the post from Rebelle Society that was entitled, “You, my brown-eyed girl.” That was just too great a response from FP that had to be shared with you.

#2: “I just wanted to share my FP story with you. I’ve been on an airplane all day reading your book. It just happens to be 7/17/17. Today I woke up at 7:17 and my flight gate was C17 coincidence? So I’m finishing reading your first experiment on my way to Vegas and contemplate what it is I’d like to ask the FP for within 48 hours.

“Now I’m not specific as you suggest, I’m just expecting. Of course with all of my 17 occurrences today Though, I plan to put money on the number 17 while playing roulette. While this has worked a couple of times before, I have never put this much money or walked up to a table and just played 1 number only, NEVER.

“But determined I was and to my surprise 17 hit!! This happened within maybe 5 hours of asking the FP for a sign. I just wanted to thank you for your amazing book and how excited I am to read more.”

#3. “Last night I read E-cubed straight through. As I was reading the first couple of chapters where you recap E-Squared, I read “the dude abides” and the “VW Jetta” principles. I stopped for a second and asked myself what exactly would I need to see to be convinced of the validity of what you say.

“I decided that in 48 hours I would need to see the name “Mimi” in real life — not on TV or the Internet — as this was the obscure nickname my mom used to call me when I was a child,55 years ago! Only she used it and it’s obscure enough that, to me, it sure beats butterflies or something like that. I finished your book last night and, since I wasn’t ready to go to bed, I picked up an English mystery novel I’d gotten at the library. I opened it and on the opening page was a quote the author used to set the tone of his novel:
“Knock hard. Life is deaf.”–Mimi Parent

Thanks everybody who showed up for my FB Live debut yesterday. It’s available on my Facebook page and the Hay House page if you’re interested.

Pam Grout is the author of 18 books including E-Squared: 9 Do-it-Yourself Energy Experiments that Prove Your Thoughts Create Your Reality and the just-released, Art & Soul,Reloaded: A Year-Long Apprenticeship to Summon the Muses and Ignite Your Daring, Audacious, Creative Side.

← The Deuce of Clubs is not the only card in the deck: Change your story, change your life
Why perfectionism is a no-fly zone →