All I Really Need to Know I Learned from Traveling

“We are all here together on God’s jeweled dance floor.”—Hafiz 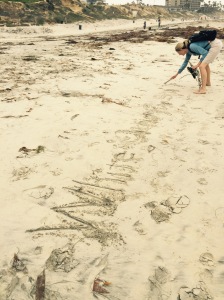 Please keep this to yourself. (Or at least don’t tell my editor who is expecting the manuscript to my new book on September 1). The only words I’ve written in the last 8 days have been in the sand on Pacific Beach in San Diego.

I gave a workshop (only I call it a playshop) last Saturday and Taz and I took a drive up the California coast to visit friends. And, yes, we danced outside on the full moon (it’s a thing one of my power posses does to stay connected). My friend Anita Moorjani, who made Taz and I the most amazing Indian food, even joined in the fun. Life, to paraphrase the t-shirts, is amazing.

So since I’m playing catch up today (including buying a new phone since I accidentally dropped mine in the toilet), thought I’d run this article that first appeared on Huffington Post.

I was raised in a small town in Kansas where I learned to read, write and politely answer stranger’s number one question, “Where’s Toto?” But my real education didn’t begin until I left the borders of my own country.

Here are five really life-changing lessons I learned from traveling:

1. It’s the people, stupid. Bucket lists are fun to check off. And there’s no question that seeing the Eiffel Tower, climbing Pike’s Peak and visiting the Great Pyramid of Giza are worthwhile endeavors. But the travel experiences that stand out, the ones that mean the most are encounters with locals. Meeting Hank and his cat, Poop Deck, who live on Hank’s sailboat in St. Croix’s Christianstead Harbor was far more enlightening than visiting the island’s bioluminescent bay.

Hanging out with Ping, a proud Maasai warrior at Mara Plains Camp in Kenya’s Olare Motorogi Conservancy, led to far more lions than any guidebooks. Ping, who has lived alongside wildlife his entire life and reads nature’s subtle signs as a way of survival, led me to day-old baby elephants, a trio of male lions who had just taken down a hippo and rhinos who, without Ping, would have been as elusive as Waldo.

2. Money does not equal happiness. I always smile when a Westerner announces their noble, selfless plans to help poor unfortunates in what we call “a third world country.” Invariably, they return home from their volunteer vacation suitably chastened, not sure who helped whom. They become aware, often for the first time, of vast pools of human resilience and joy found in cultures not bogged down with material possessions. Creativity and sheer genius emerges when there’s no television, no Words With Friends, no material excess requiring a storage unit.

Soweto, for example, taught me more about possibility than anything Tony Robbins might write. With unemployment soaring around 50 percent, crafty entrepreneurs sell picture frames made from discarded Coke cans, zebras carved from table legs and statues made from bottle caps. Street musicians sing, old friends tap-dance in unison, jugglers toss knives, balls and witty repartee, all hoping their near-professional efforts will coax a five-rand note from passers-by.

3. The news media often has it wrong. If you believe the news, it’s dangerous to leave your house, let alone the country. But in the last year alone, I’ve been to four countries with State Department warnings and not once have I ever felt threatened in any way. I even heard Pico Iyer talk about a recent assignment in Iraq. He said that the same people carrying the signs (“Death to Americans” and the like) would invite him home for dinner after the protests. I’m not being flip. I just happen to know that the scariest part of most overseas trips is the media reports which, when you really get down to it, are nothing but anomalies.

4. It always pays to look deeper. What news-savvy American hasn’t picked up the notion that he’s not likely to win any popularity contests with Muslims? As I discovered in Turkey, that stereotype is misguided and downright insulting.

Hospitality is an art in the Muslim world, a cherished virtue that encourages practitioners to view every person who comes across their path as sent to them by Allah himself. It’s next-to-impossible to be in the general vicinity of another human being in Turkey without being handed a fig or a hazelnut or a bowl of fresh yogurt made that morning from the milk of their own cow.

Hospitality is so over-the-top (commerce, it seems, is beside the point) that any crusty idea that foreigners are different or that life sucks or that the world is going to hell in a handbasket are properly dashed against the inhospitable shores of the Black Sea, a region in Turkey that looks more like the Colorado Rockies than Lawrence of Arabia.

5. People are the same wherever you go. It’s a universal belief — that “those people” over there are completely different than us, that we have nothing in common with those who practice different religions, follow different customs or dress differently. Traveling disavows that falsehood with a vengeance. Even though my Ecuadorian hosts worshiped Inti, the Incan God of the Sun, and regularly dined on beetle larvae and guinea pig grilled spread eagle on a spit, I discovered that, just like me, they get crushes, like to dance and tell jokes. When it comes right down to it, all of us, from Singapore schoolgirls to Namibian pygmies, want the exact same thing: happiness, well-being for our families and the right to pursue our dreams.

← Manifesting your perfect partner and other tomfoolery
“Wake up expecting things.”—Christine Baranski →