Why you should always say yes to fun. No exceptions

“What has trapped you in a belief system that says your ecstasy can only come when you have certain physical stimuli in place? We want you to understand that ecstasy is your birthright. It is not something that exists outside of you.”—Daniel Scranton 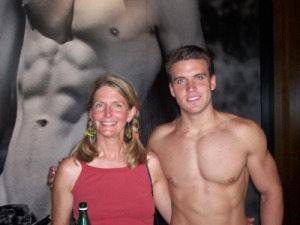 A new member of yesterday’s power posse sent around the above quote. I had mentioned what I call “The Divine Buzz,” this sense of being joyful and filled with well-being. I often experience it just walking across the floor of my kitchen.

It’s not something that requires me to be staying in five-star hotels or meeting America’s Top Chefs. It just is…anytime I take down my preconceived mental constructs.

The first corollary in E-Cubed is called the Boogie-Woogie principle. Or the importance of NOT being earnest. It’s about the Divine Buzz, about being happy. Stated simply it says that the more fun you have, the better life works.

I found the above picture in an old computer I was going through over the weekend. I was in New York a few years ago with an old college friend and both our daughters who, at the time, were 14 or 15. Because there were four of us, we each got to pick one thing we absolutely wanted to do. Sarina, Mary’s daughter, absolutely wanted to have her picture taken with an Abercrombie and Fitch model.

So I decided, “Why not? Why should Sarina have all the fun?”

It took me awhile in this life of mine, but I have finally concluded that fun is ALWAYS the right answer. And, more importantly, I know that anything can be fun—-having my picture taken with an Abercrombie model or simply walking across my kitchen floor.

As the Course is Miracles says, “I have a kingdom I must rule.” That kingdom is and always will be my mind.”

6 Comments on “Why you should always say yes to fun. No exceptions”